Do you need an exhibition stand that floats?

Volvo Penta did, and we delivered.

Building a large exhibition stand at any exhibition is a logistical and time-consuming task. It takes months of planning and days on site for successful execution.

But what if the exhibition stand is to be floating on Darling Harbour? This brings a new level of exhibition logistics complexities.

The Volvo Penta stand at the Sydney International Boat Show 2019 was a large 19 x 7.8m stand on a floating dock in Cockle Bay, Darling Harbour. This case study will discuss some of the integral parts of the design and build of the floating stand.

The Volvo Penta Stand at the 2019 Sydney International Boat Show (SIBS) had one main objective; to introduce the D4/D6 Propulsion System in a World Premiere.

SIBS was the ideal exhibition for Volvo Penta to launch their new motor. It gave avid boat enthusiasts the opportunity to see the product in person, allowed them to discuss and learn about the D4/D6 and gave Volvo Penta a chance to receive immediate feedback on the launch.

The anticipation and build up around the D4/D6 premiere meant that stand had to be grand in all aspects; size, design and event presence. 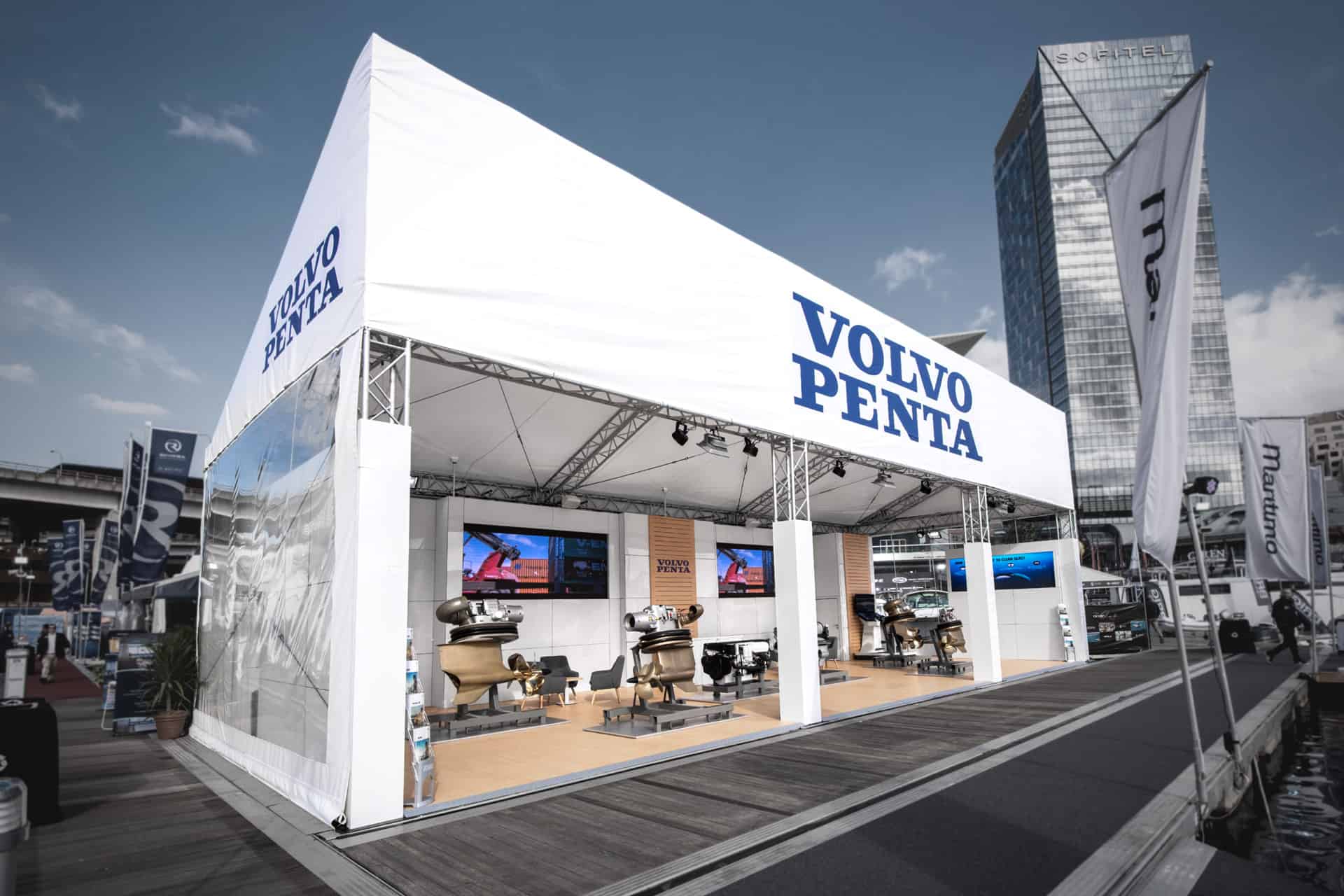 Standing out at an exhibition with over 300 exhibitors and set over 32,600sqm, is a hard task. The design considerations for the Volvo Penta stand made sure they would be prominent and attract wanted attention at a highly saturated show. A large open stand, like Volvo Penta’s was a true eye-catcher and showed attendees that Volvo Penta is an A-brand and market leader.

The sheer size of the stand foot print, 148.2 m2, meant that this would be the largest outdoor stand structure Expo Centric has built.

The design ensured all areas of the foot print were used to the best advantage.

The strong prominent branding allowed Volvo Penta to accentuate their brand values in a way that more traditional designs would not have been able to achieve. The Volvo Penta branding was strengthened by the clever use of graphics and brand messages within the stand design, making sure the layout and branding reinforced each other for maximum impact.

With the Volvo Penta stand being so large (19m x 7.8m stand / 7m high), numerous considerations had to be factored into the stand build and transport.

The stand space was booked on 3 pontoons at the Cockle Bay Marina. Being on a pontoon, there was no access for forklifts, cranes and trucks that are needed to assemble the oversized structure.

Therefore, the frame of the stand was assembled on the pontoons off site at Rozelle and then barged into the marina and docked into the SIBS site place.

This added a whole new level of logistics in the exhibition stand build process. 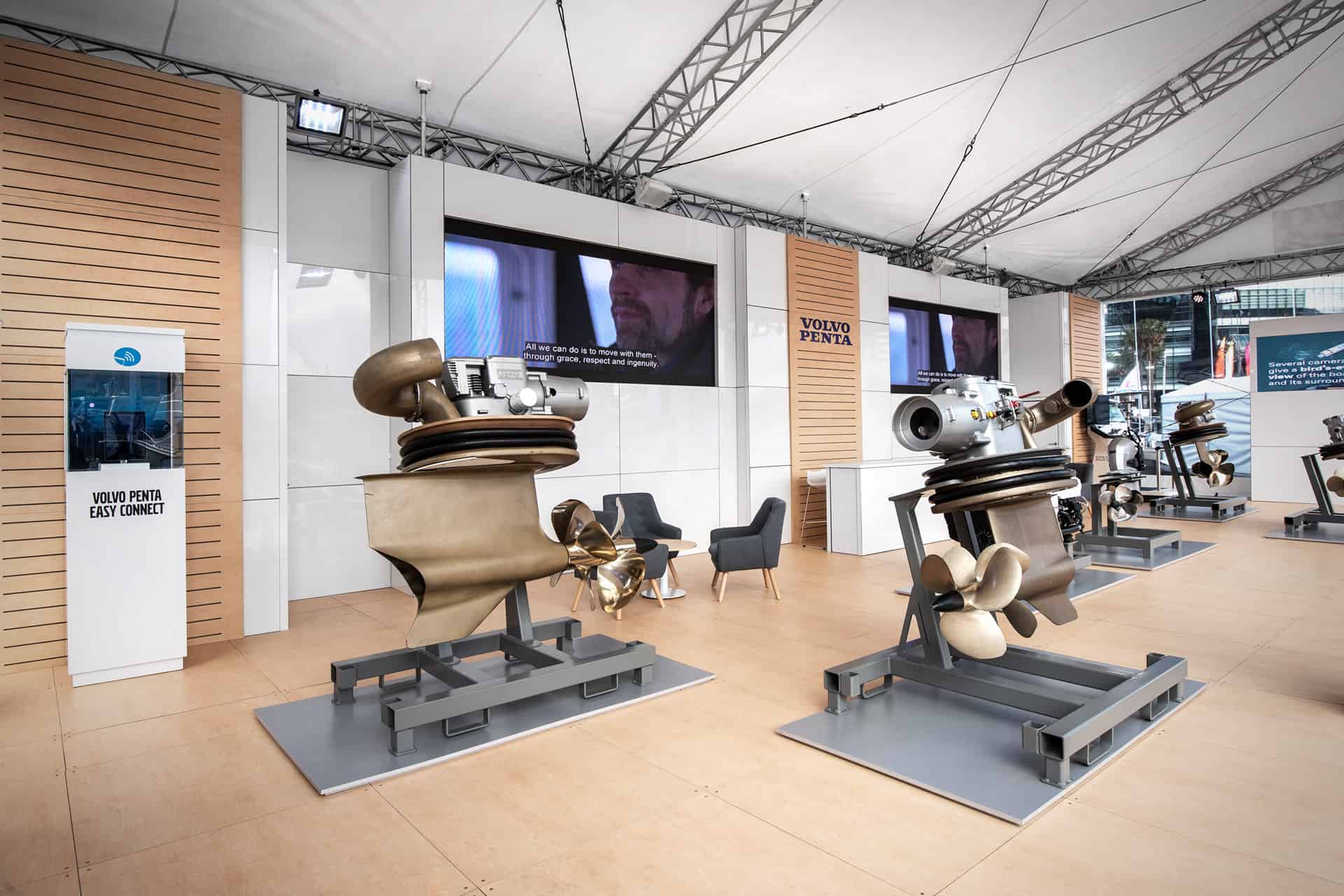 Being a floating stand, the weight of the stand and components that were to be displayed on the stand (truss structure, Volvo Penta motors etc), were a major consideration that needed to be considered at every stage of the stand design and build.

The stand weight exceeded 4 tonnes, with 3.5 tonnes in Volvo Penta motors alone, so weight distribution on the pontoon was imperative.

If the weight on the stand elements was not distributed evenly, the stand structure such as trusses and frames would not fit together correctly, the flooring would not be level and / or stable and the worst case scenario, the pontoon would be lopsided and elements could slide off into the surrounding water.

The motors on the stand were the heaviest components:

These were strategically placed on the pontoon to ensure the weight loading was correct. 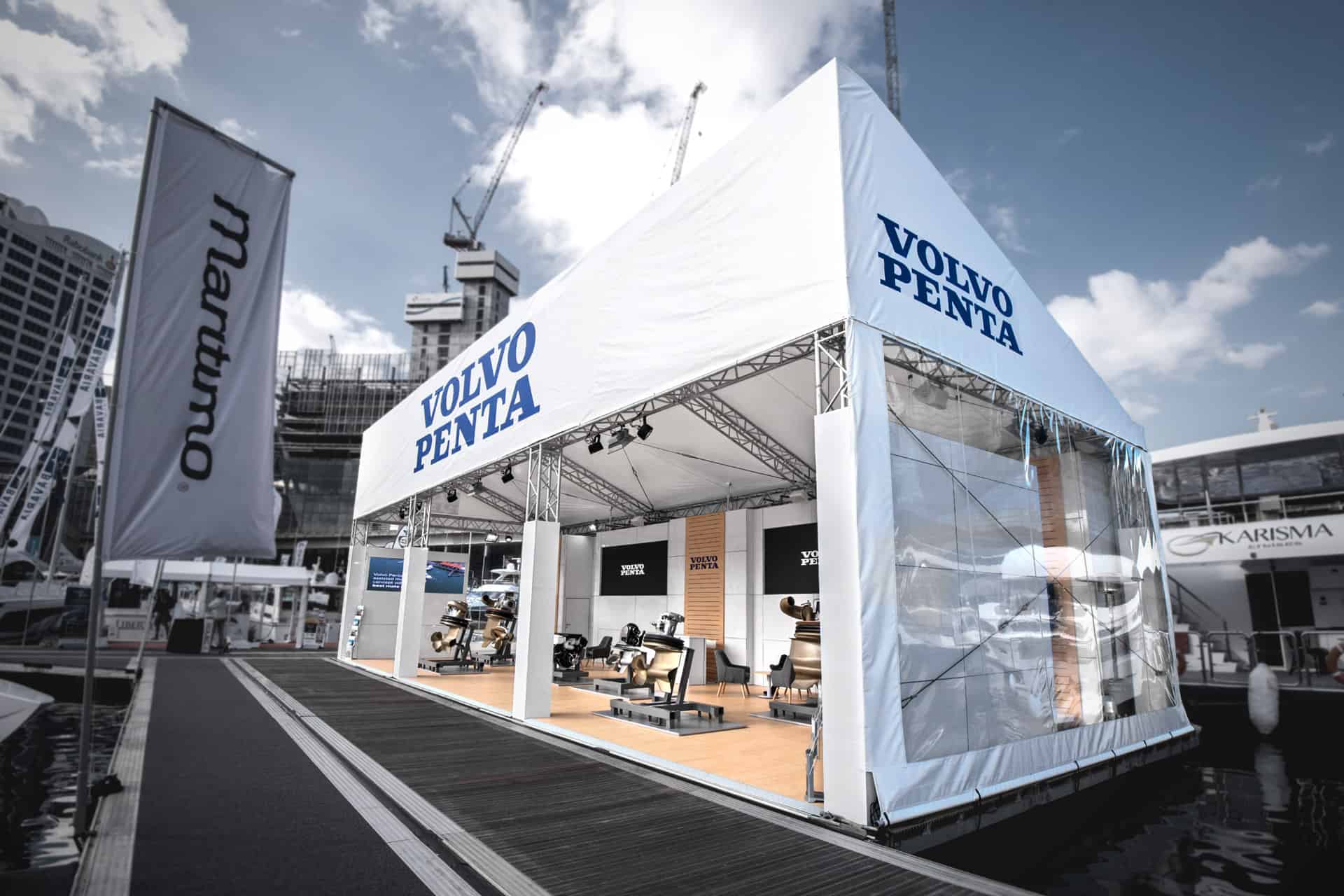 The Volvo Penta stand was not undercover and was vulnerable to all weather elements during the build and also during the 5 days of SIBS.

The stand design had to be created to allow for adverse weather conditions and also designed to protect the internal components of the stand, including LED screens, AV equipment and the Volvo Penta motors.

The rear skins were specially designed to have storm flap joins, so as to protect the stand in the case of a storm. These storm joins were covered with an extra-large (18.5m x 4m) stretched canvas skin over the top to:

The external skin was branded with the Volvo Penta logo and large graphic imagery.

The building timeline of the stand also had to be carefully curated to make sure the weather did not affect any stand components. After the initial truss was barged into the marina, the roof skin was the first component to be installed as to offer protection of all the other components to follow, such as flooring, LED screens and AV equipment.

The side of the stand also included large clear skins. These were included into the design to allow vision through the stand from one side to the other, to allow natural light to flood the internal of the stand, while also providing protection from inclement weather conditions. 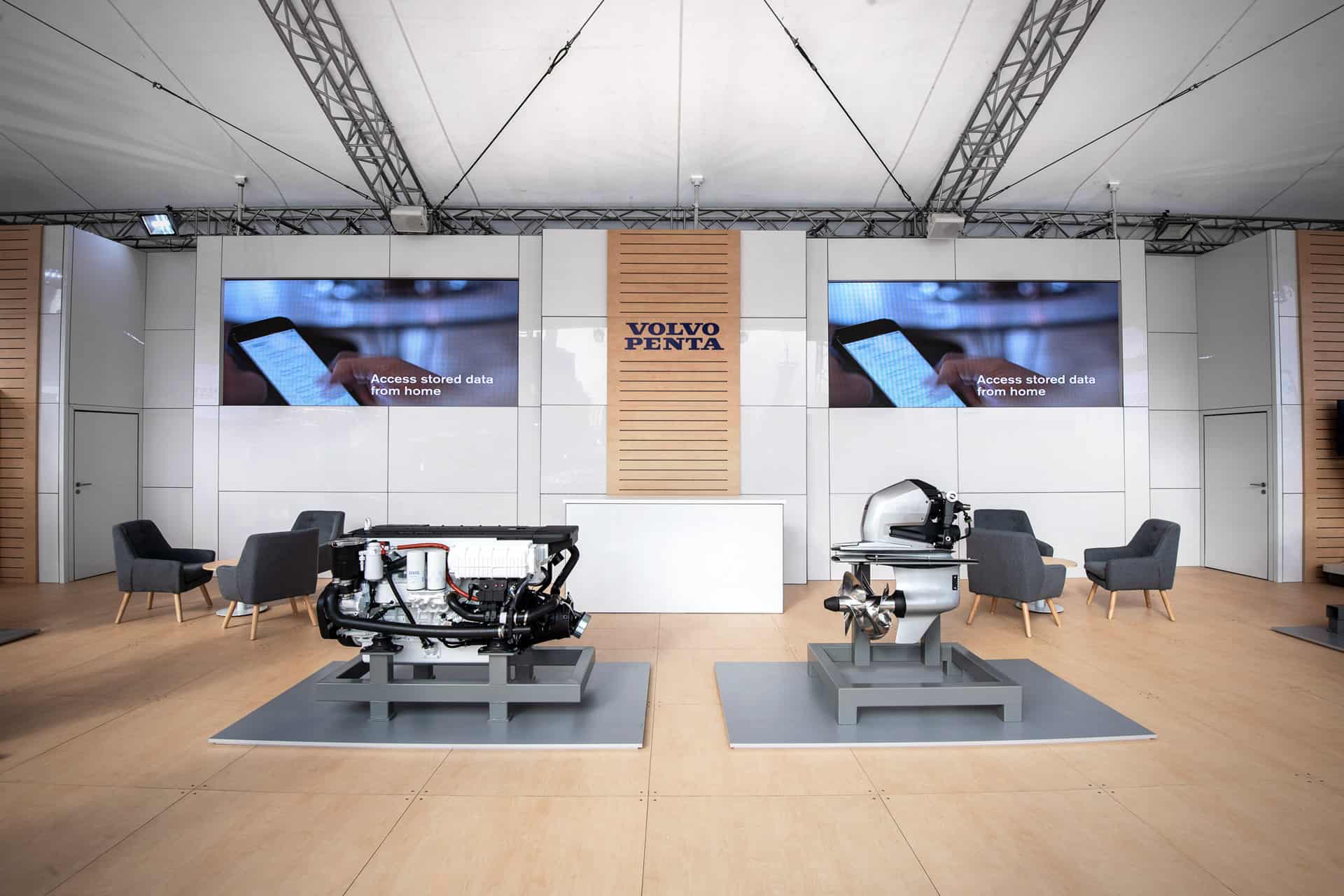 Volvo Penta showcased their brand within the stand through the extensive use of LED screens. LED screens allow brands to show content regarding products and brand values in an engaging and impressive medium.

The LED screens were also set up to enable synced content on the LED screens and allow for live streaming of on-stand presentations.

Interactive technology was also a feature of the Volvo Penta stand. The incorporation of interactivity technology provides a brand an ingenious way to engage with potential customers. It gives the stand visitors new interactive experiences that evoke genuine emotions, making a brand uniquely memorable. It gives prospects a reason to start conversations and experience the benefits of the product for themselves.

The inclusion of the Volvo Penta boat simulator on the Volvo Penta stand did just that; allowed prospects to engage with the Volvo Penta brand in a unique, fun and interesting way. This not only encouraged people to spend more time on the stand but gave them a chance to immerse themselves into the products and brand. 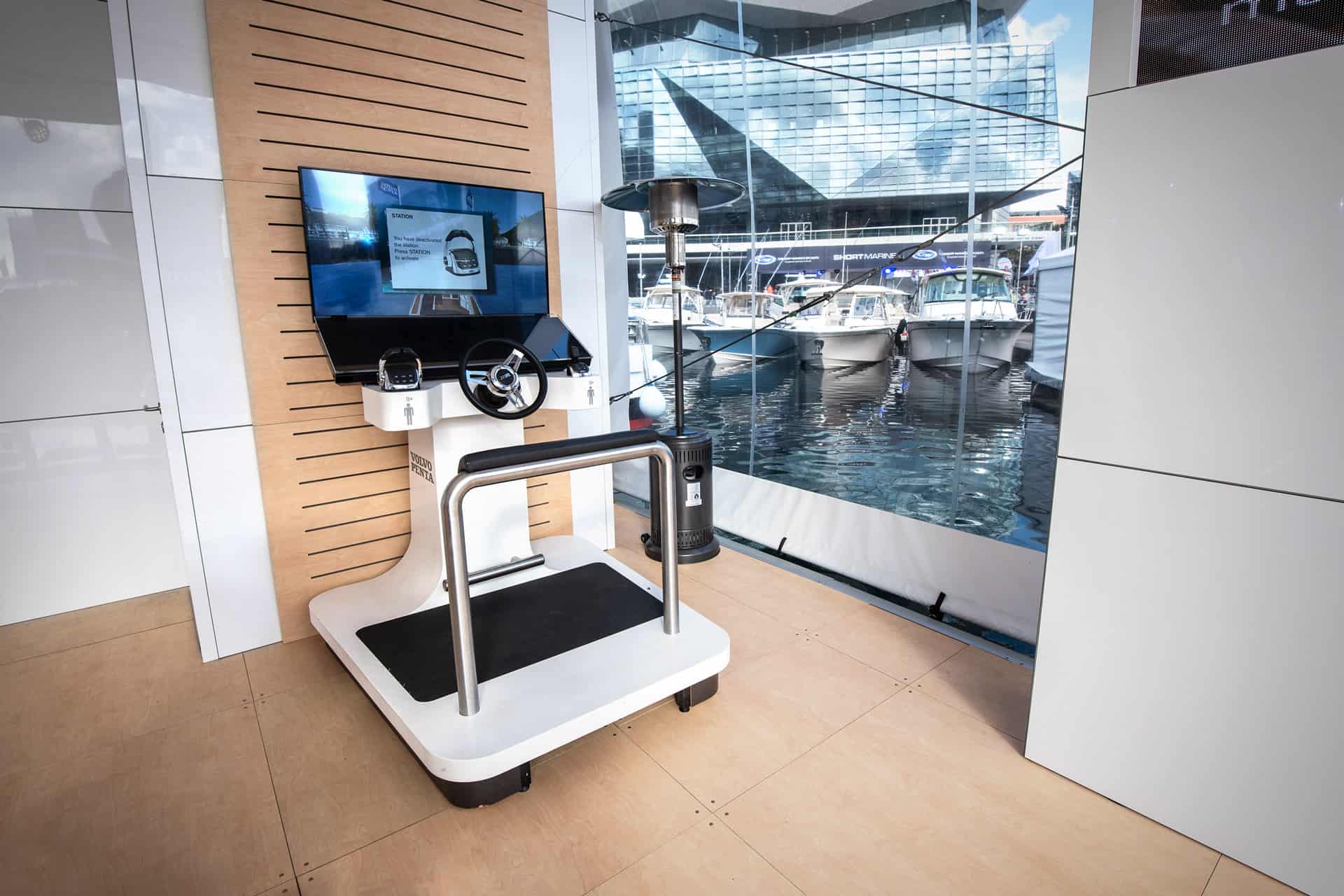 The lightning on the stand was dynamic. The lighting plan included 4 spotlights used to illuminate the presenters during the press event and presentations, but when not used in a presentation the spotlights could be re-focused to highlight the display engines. 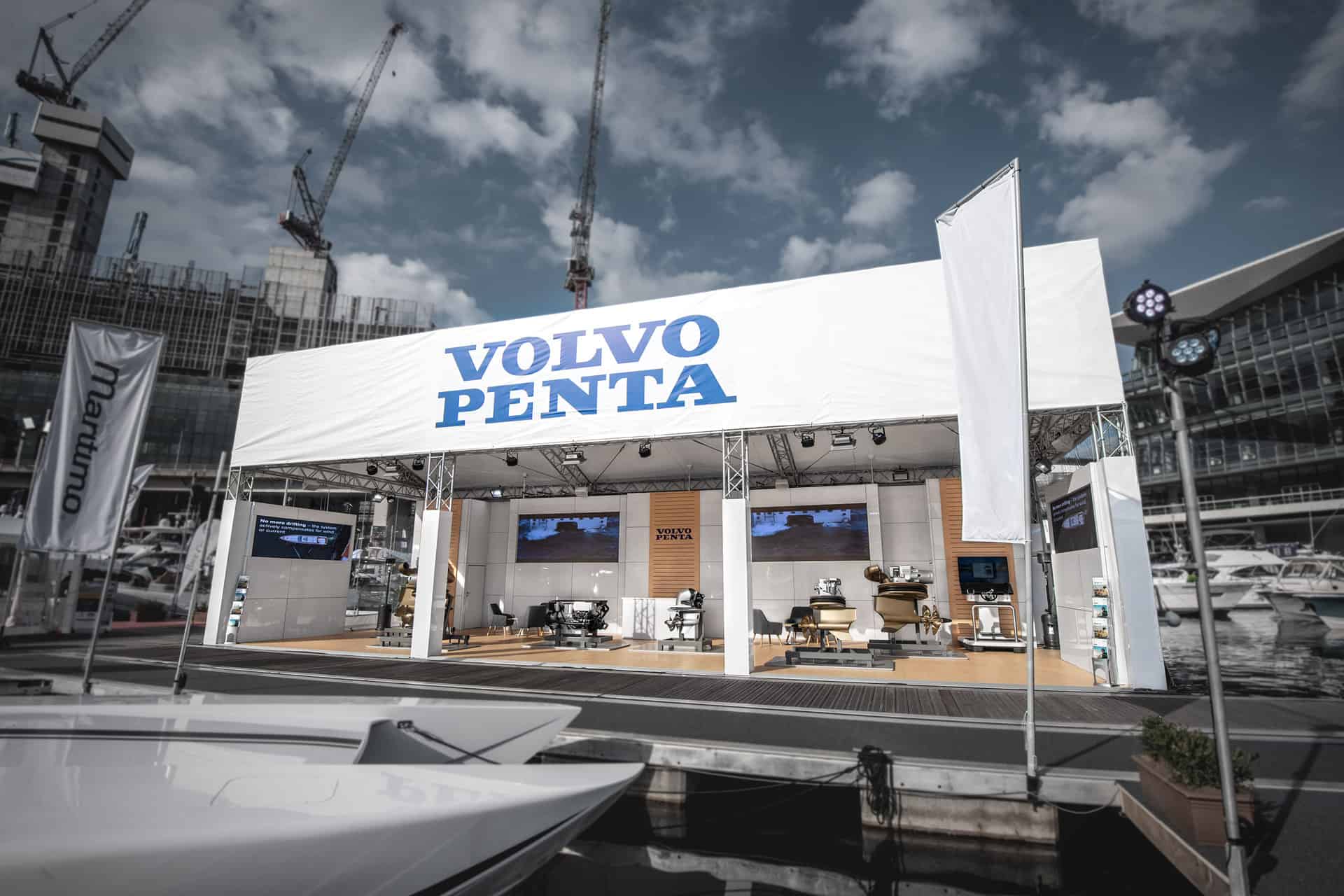 Hosting events on your exhibition stand can be a great way to make invited guests feel extra special, it provides them with a sense of exclusivity. An event for a product launch, such as the world premiere of the Volvo Penta D4/D6, is the perfect opportunity to generate extra hype about the product. Targeted events help a brand to develop deep relationships with the attendees through personal engagement in a relaxed, yet professional environment.

On the first night of SIBS a product launch event was held on the Volvo Penta stand. Invitations were sent to desired attendees prior to the opening of SIBS, this ensured that event held a targeted audience, therefore could be targeted towards their needs and wants. The event was attended by more than 150 attendees, who enjoyed hospitality and presentations from the Volvo Penta team.

The Sydney International Boat Show (SIBS) has been the Southern Hemisphere’s premier boat show since 1968. Held in Sydney at International Convention Centre, Sydney and the adjoining purpose-built marina on Cockle Bay, Darling Harbour, the show attracts over 63,000 people each year.

SIBS has approximately 300 exhibitors set over 32,600sqm of undercover exhibit space and additional exhibitors and boats on display in the Cockle Bay Marina.

Whether you’re boating and fishing on Australia’s inland waterways or prefer the open waters off the coast, the Sydney International Boat Show promises everything for the avid boatie, fisherman or sailor, with new vessels, new tackle and loads of technology designed to make your adventure on the water even more enjoyable.

Volvo Penta is a world-leading supplier of power solutions to marine and industrial applications. Driven by innovation, their close cooperation with customers and their century-long experience, they supply comprehensive solutions that are made to move emotions, people, businesses and societies.

Volvo Penta aim to be the most forward thinking and customer-focused supplier of sustainable power solutions. Through their marine and industrial engines and systems, they aim for total sustainability – economic, social and environmental.

Have a challenging stand? Send us your brief and see if we can solve your challenges too.